In 2004, Hurco introduced first TM Series, which are slant-bed lathes. The Hurco CNC lathe was a success, leading to a record year for Hurco in 2005. The Hurco TM8 CNC lathe with its small footprint, chip management system and large work cube became popular for small batch manufacturing. This Hurco lathe has a maximum turning diameter of 14 inches and turning length of 17.6 inches. Its one of a series of 4 different sizes of Hurco CNC lathes. 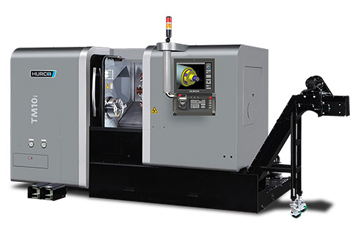 Hurco was founded in 1958 by Gerald Roch and Edward Humston. Mr. Roche grew up around a tool and die shop and had a passion for building things. When computers began to emerge in the 1960s, even though they were large and cumbersome, Mr. Roch envisioned them working with machines. He obtained patents for interactive control technology which was later called conversational programing. In 2015, Hurco acquired two CNC machine builders, Milltronics and Takumi. In recent years, these brands carry Hurco mill turn control features.

For premium components and performance, look for a Hurco CNC lathe for sale with an X in the series name. The TMX8i and TM10i are their most recent models. These CNC lathes have options like parts conveyors, bar feeders, chuck air blast doors, auto doors and more.

These lathes are designed for sector with high-torque capabilities common for the aerospace and energy industries. This TM series is built for making big parts, and lots of them. They feature premium components for premium performance. In addition to standard features, they have options for a steady rest, overhead hoists, among other things. The TM-18 series has been in production since 2012. Recent models have these configurations: