Hurco CNC has been in business since 1968 and has always been cutting-edge with both machining and process-control technology. Some key dates for their equipment include 1986, when they introduced the 3-axis machine, In 1997 they introduced the VMX CNC mills, In 2003 the VM series and VTXU 5-axis were started and lastle 2004 the TM slant-beds hit the market. In 2006 their business expanded rapidly with the introduction of the SR Series 5-axis machining center and the WinMax software. The TMXMY series started in 2010 and was rebranded to include the "i" in 2012. This includes the HSi series which stands for High Speed along with the Ultimotion.

Hurco machines with trunnion tables have integrated tables instead of simply sticking a trunnion table on a 3-axis CNC machining center and then calling it a 5-axis. This allows for more clearance on the Z-axis. This series is ideal for machinists experienced in 3-axis machining, but ready for the benefits of 5-axis. You still machine in a linear fashion, but just machined more sides with this type of CNC. The trunnion 5-axis mill by Hurco allows for better undercut, larger work volume, and more torque.

Since 1984 when Hurco CNC introduced the dual-screen console, Hurco has been focused on designing controls that are easy to use and intuitive. They were early innovators in conversational programming aimed at making machining simple, however, this did not mean that they could only make simple parts.

The WinMax control which has been on machines since 2013 can better be described as multi-lingual. It allows for both the powerful NC programming as well as conversational programming. Additionally, WinMax controllers fully integrate with CAD/CAM software solutions so that programming can easily be done off-line, though concurrent programming is a standard feature of the control console. WorkNC is a preferred CAM system for easy integration. 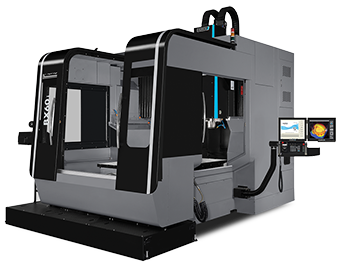 Hurco Supports ISO/EIA standards that are common with Fanuc or Siemens programs, so you can use existing NC programs on a Hurco. The control also offers Full Macro B support and most G & M cores that an NC programmer uses.

When selecting a Hurco to meet your needs, it is helpful to understand the Series naming standards. The VM represents Vertical Milling, then there are typically two numbers representing the number of inches travel on the X-axis and another letter designating special features.

The VMX line ( Hurco VMX 30t) is the most popular of the 3-axis machining centers. The first two numbers in the name represent the X travel. We have used Vertical Milling Machining Centers in this line going back to 2003.

The SR Series (Example: VMX60SRTi) of 5-axis mills has a swivel head with either an A or C style rotary table. The extra size of the rotary table allows for versatility for secondary operations or 3-axis work. In this example, the travel is 60 x 26 x 24 with a spindle speed of 12,000 rpm and tool capacity of 40 CAT 40.

The HTM series (Example: HTM30i) is the toolroom mill designed with an open bed for easy access to the table. Its equipped with UltiMotion. In this example, the machine is 30 x 16 x 18 with 8,000 rpm and 16 tool max.

The BX series (Example: BX40i) features a high-speed double-column bridge design machining center. This highly stable, the high-weight machine provides exceptional accuracy and outstanding surface finish capabilities. In this example, the travel is 40.2 x 27.6 x 19.7, the spindle speed 18,000 rpm and machine weight is over 20,000 lbs. If a U is added to the series name (BX40Ui), then a trunnion table is mounted along the Y-axis.

The HM series (Example: HM1700i) is a line of horizontal mills equipped with pre-tensioned, dual ballscrews for excellent rigidity. It has large front and side access doors ergonomically designed for operator use. If an R is added to the series name, the model comes with a rotary torque table (HM1700Ri).

The VM_U series are 5-axis trunnion table machining centers with an integrated trunnion table. Like the VMX line, the first two numbers represent the X-axis travel. For example, the VM10Ui has a travel of 21 x 16 x 19 with a spindle speed of 10,000 and tool capacity of 20 CAN 40.