Home / What Is A CNC Machine?

What are CNC Machines?

The History of CNC Machines

John T. Parsons (1913-2007) of Parsons Corporation in Traverse City, MI is considered the pioneer of the numerical control, the precursor to the modern CNC machine. For his work, John Parsons has been called the father of the 2nd industrial revolution. He needed to manufacture complex helicopter blades and quickly realized that the future of manufacturing was connecting machines to computers. Today CNC-manufactured parts can be found in almost every industry. Because of CNC machines, we have less expensive goods, stronger national defense and a higher standard of living than is possible in a non-industrialized world. In this article, we’ll explore the origins of the CNC machine, different types of CNC machines, CNC machine programs and common practices by CNC machine shops.

In 1946, the word “computer” meant a punch card operated calculation machine. Even though Parsons Corporation had only made one propeller before, John Parsons convinced Sikorsky Helicopter that they could produce extremely precise templates for propeller assembly and manufacturing. He ended up inventing a punch-card computer method to calculate points on a helicopter rotor blade. Then he had operators turn the wheels to those points on a Cincinnati milling machine. He held a contest for the name of this new process and gave $50 to the person who coined “Numerical Control” or NC. 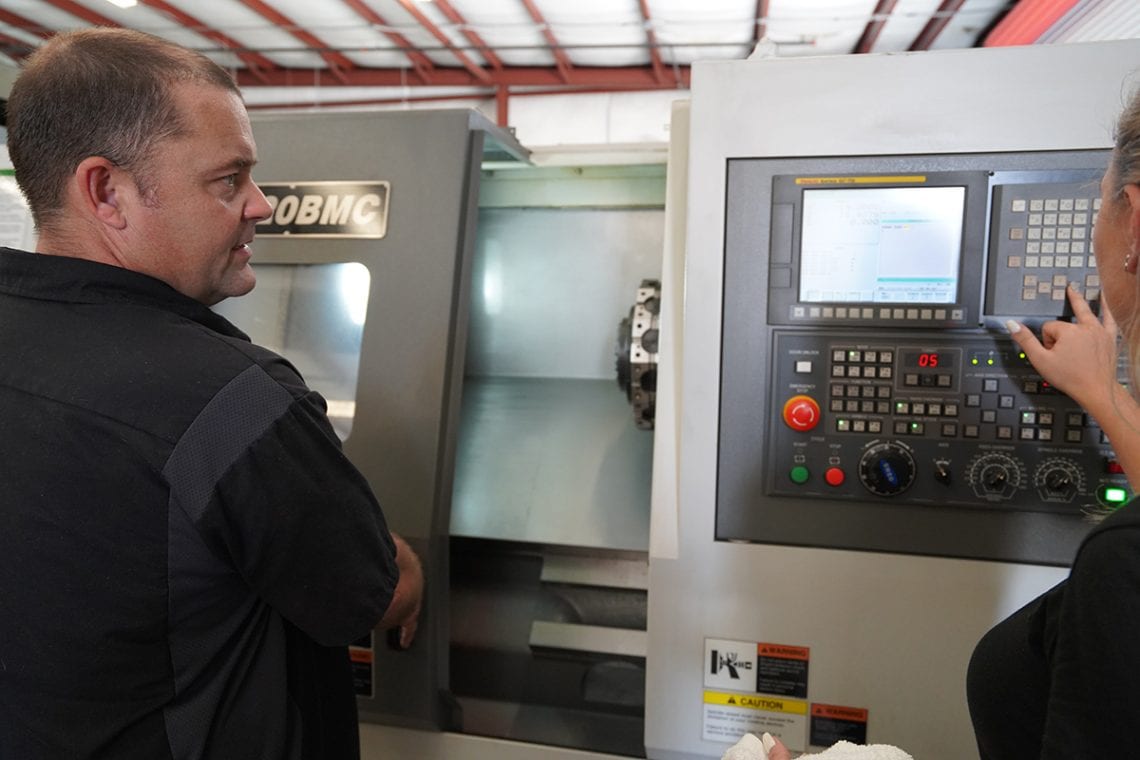 In 1958, he filed a patent to connect the computer to the machine. His patent application arrived three months before MIT, who was working on the concept which he had started. MIT used his concepts to make the original equipment and Mr. Parsons’ licensee (Bendix) sub-licensed to IBM, Fujitusu, and GE, among others. The NC concept was slow to catch on. According to Mr. Parsons, the people selling the idea were computer people instead of manufacturing people. By the early 1970s, however, the US army itself popularized the use of NC computers by building and leasing them to numerous manufacturers. The CNC controller evolved in parallel with the computer, driving more and more productivity and automation into manufacturing processes, especially machining.

What is CNC Machining?

CNC machines are making parts around the world for almost every industry. They create things out of plastics, metals, aluminum, wood and many other hard materials. The word “CNC” stands for Computer Numerical Control, but today everyone calls it CNC. So, how do you define a CNC machine? All automated motion control machines have three primary components – a command function, a drive/motion system, and feedback system. CNC machining is the process of using a computer-driven machine tool to produce a part out of solid material in a different shape 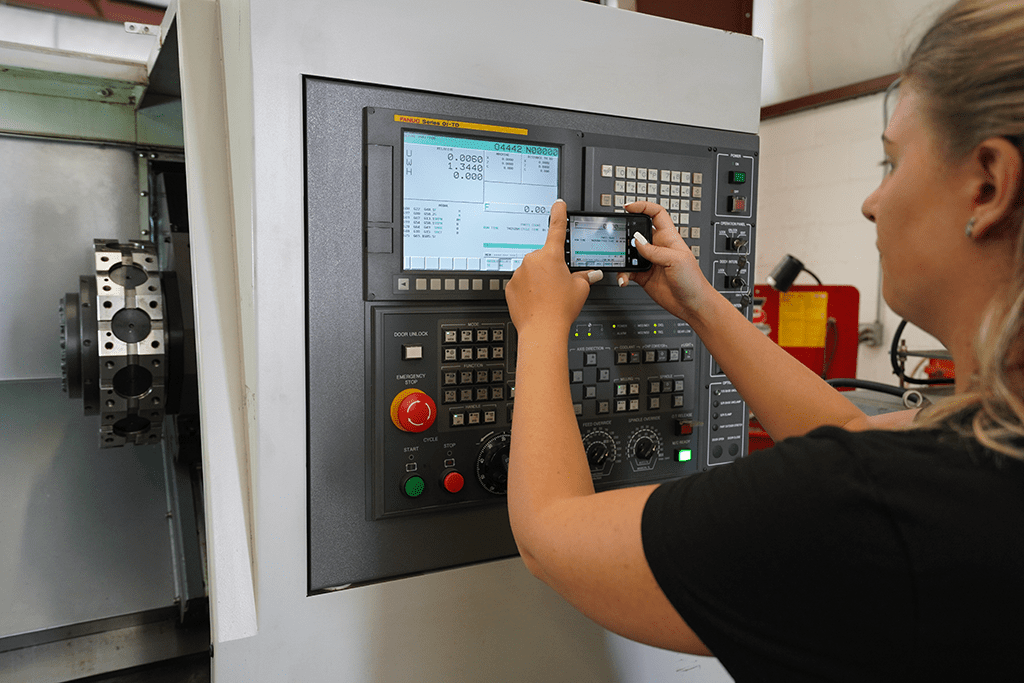 The CNC depends on digital instructions usually made on Computer Aided Manufacturing (CAM) or Computer Aided Design (CAD) software like SolidWorks or MasterCAM. The software writes G-code that the controller on the CNC machine can read. The computer program on the controller interprets the design and moves cutting tools and/or the workpiece on multiple axes to cut the desired shape from the workpiece. The automated cutting process is much faster and more accurate than a manual movement of tools and workpieces which is done with levers and gears on older equipment. Modern-day CNC machines hold multiple tools and make many types of cuts. The number of planes of movement (axes) and the number and types of tools that the machine can access automatically during the machining process determine how complex a workpiece a CNC can make.

How To Use A CNC Machine

CNC machinists must gain skills in both programming and metal-working to make full use of the power of a CNC machine. Technical trade schools and apprenticeship programs often start students on manual lathes to get a feel for how to cut metal. The machinist should be able to envision all three dimensions. Today software makes it easier than ever to make complex parts, because the part shape can be drawn virtually and then tool paths can be suggested by software to make those parts.

Type of Software Commonly Used in the CNC Machining Process

CAD software is the starting point for most CNC projects. There are many different CAD software packages, but all are used to create designs. Popular CAD programs include AutoCAD, SolidWorks, and Rhino3D. There are also cloud-based CAD solutions, and some offer CAM abilities or integrate with CAM software better than others.

CNC machines often use programs created by CAM software. CAM allows users to set up a “job tree” to organize workflow, set tool paths and run cutting simulations before the machine does any real cutting. Often CAM programs work as add-ons to CAD software and generate g-code that tells the CNC tools and workpiece moving parts where to go. Wizards in CAM software make it easier than ever to program a CNC machine. Popular CAM software includes Mastercam, Edgecam, OneCNC, HSMWorks, and Solidcam. Mastercam and Edgecam account for almost 50% of the high- end CAM market share according to a 2015 report.

Direct Numeric Controls were used to manage NC programs and machine parameters. It allowed programs to move over a network from a central computer to onboard computers known as machine control units (MCU). Originally called “Direct Numeric Control,” it bypassed the need for paper tape, but when the computer went down, all its machines went down.

Distributed Numerical Control uses a network of computers to coordinate the operation of multiple machines by feeding a program to the CNC. The CNC memory holds the program and the operator can collect, edit and return the program.

Modern DNC programs can do the following:

MDC software may include all the functions of DNC software plus collect additional data and analyze it for overall equipment effectiveness (OEE). The Overall Equipment Effectiveness depends on the following: Quality – the number of products that meet quality standards out of all products produced Availability – percent of the planned time that specified equipment is working or producing parts Performance – actual running speed compared to planned or ideal running rate of the equipment.

OEE is a key performance metric (KPI) for many machine shops.

Machine monitoring software can be built into DNC or MDC software or purchased separately. With machine monitoring solutions, machine data such as setup, runtime, and downtime are automatically collected and combined with human data such as reason codes to provide both historical and real- time understanding of how jobs run. Modern CNC machines collect as much as 200 types of data, and machine monitoring software can make that data useful to everyone from the shop floor to the top floor. Companies like Memex offer software (Tempus) that takes data from any kind of CNC machine and puts in into a standardized database format that can be displayed in meaningful charts and graphs. A data standard used by most machine monitoring solutions which has gained ground in the USA is called MTConnect. Today many new CNC machine tools come equipped to provide data in this format. Older machines can still provide valuable information with adapters. Machine monitoring for CNC machines has become mainstreamed just within the last few years, and new software solutions are always in development.

What are the Different Types of CNC Machines?

There are countless different types of CNC machines today. CNC machines are machine tools that cut or move material as programmed on the controller, as described above. The type of cutting can vary from plasma cutting to laser cutting, milling, routing, and lathes. CNC machines can even pick up and move items on an assembly line.

Below are basic types of CNC machines:

Lathes: This type of CNC turns the workpiece and moves the cutting tool to the workpiece. A basic lathe is 2-axis, but many more axes can be added to increase the complexity of cut possible. The material rotates on a spindle and is pressed against a grinding or carving tool that makes the desired shape. Lathes are used to make symmetrical objects like spheres, cones, or cylinders. Many CNC machines are multi-function and combine all types of cutting.

Routers: CNC routers are usually used to cut large dimensions in wood, metal, sheets, and plastics. Standard routers operate on 3-axis coordinate, so they can cut in three dimensions. However, you can also buy 4,5 and 6-axis machines for prototype models and complex shapes.

Milling: Manual milling machines use handwheels and lead screws to articulate a cutting tool onto a workpiece. In a CNC mill, the CNC moves high accuracy ball screws to the exact coordinates programmed instead. Milling CNC machines come in a wide array of sizes and types and can run on multiple axes.

Plasma Cutters: The CNC plasma cutter uses a powerful laser to cut. Most plasma cutters cut programmed shapes out of sheet or plate.

3D Printer: A 3D printer uses the program to tell it where to lay down small bits of material to build the desired shape. 3D parts are built layer by layer with a laser to solidify the liquid or power as the layers grow.

Pick and Place Machine: A CNC “pick and place” machine works similar to a CNC router, but instead of cutting material, the machine has many small nozzles which pick up components using a vacuum, move them to the desired location and put them down. These are used to make tables, computer motherboards and other electrical assemblies (among other things.)

CNC Machines can do many things. Today computer technology can be put on just about machine imaginable. The CNC replaces the human interface needed to move machine parts to get the desired result. Today’s CNC’s are capable of starting with raw material, like a block of steel, and making a very complex part with precise tolerances and amazing repeatability.

Putting it All Together: How CNC Machine Shops Make Parts 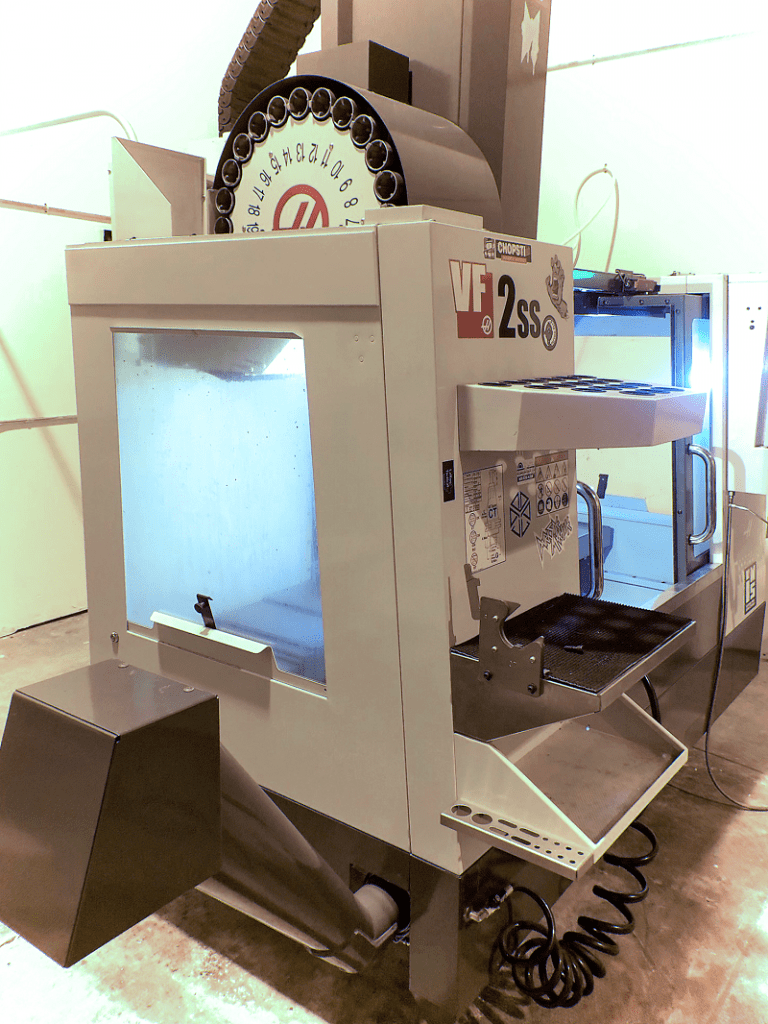 Operating a CNC involves both the computer (controller) and a physical setup. A typical machine shop process looks like this:

A design engineer creates the design in the CAD program and sends it to a CNC programmer. The programmer opens the file in the CAM program to decide on the tools needed and to create the NC program for the CNC. He or she sends the NC program to the CNC machine and provides a list of the correct tooling setup to an operator. A setup operator loads the tools as directed and loads the raw material (or workpiece). He or she then runs sample pieces and measures them with quality assurance tools to verify that the CNC machine is making parts according to specification. Typically, the setup operator provides a first article piece to the quality department who verifies all dimensions and signs off on the setup. The CNC machine or associated machines are loaded with enough raw material to make the desired number of pieces, and a machine operator stands by to ensure that the machine keeps running, making parts to spec. and has raw material. Depending on the job, it’s often possible to run CNC machines “lights-out” with no operator present. The finished parts are moved into a designated area automatically.

Manufacturers of today can automate almost any process given enough time, resources and imagination. Raw material can go into a machine and completed parts can come out packaged ready-to-go. Manufacturers depend on a wide range of CNC machines to make things quickly, accurately and cost-effectively.