Doosan CNC makes high-speed turning centers, horizontal machining centers, heavy-duty boring mills, vertical machining centers with live tooling, and double column machining centers. They also make a number of other specialty CNC machines. All of their equipment is CNC controlled on controllers that have held or set the standards in the industry throughout the years. Doosan Machine Tools models are mainly known for their Puma smx, Puma gt, and other CNC lathes. Whether you need a specific chuck size, spindle motor, twin turret or just want to know how Doosan machines can help your product, Give us a call at 844-262-6789. 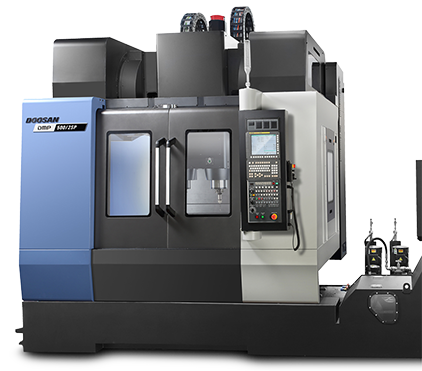 Since Daewoo started building products in South Korea in 1976, the company has changed and grown around the world. In the 1990s, Daewoo established a presence in the U.S. market when it established Daewoo Machinery Corp. Doosan purchased Daewoo in the early 2000s. Because of this acquisition, the Lynx and Puma CNC Lathes can be found with both the name Doosan and Daewoo and are sometimes listed with both names together. The purchase of Daewoo, by Doosan, began in the winter of 2003 and finalized in spring of 2005.

The following CNC machines were released under the Doosan Infracore America branding: PUMA TT series, the PUMA MX series, the DMV 8035s and the DHP 5000. At that time, they had over 100 CNC products and were shipping over 6,000 CNC machines every year to 68 sales/service offices around the world. Today they have 164 dealer networks. About 19% of their sales are from the Americas. In 2016 the company changed its name to Doosan Machine Tools but Daewoo ceased production in 2005.

Doosan can be contacted on the 24/7 on a hotline Monday through Friday at (888)-936-6726. Thier technical support is very knowledgeable and supports Daewoo as well as Doosan CNC machines of any age. They are a great resource for any Doosan CNC machine that you may need support for. Doosan also relies on a network of distributors for sales and support of its CNC machines. It has almost 30 such dealer locations throughout the United States, as well as numerous other locations around the world. You can find the one closest to you on the Doosan website.

Manuals for Doosan and Daewoo CNC

If you are buying a used Doosan or used Daewoo that doesnt have the manuals with it, they are available for purchase. Call your local dealer with the machines serial number to order any manuals that you need. Each used Doosan CNC should come with a parts manual, an electrical manual and instruction manual (subtitled Maintenance and Specifications) as well as an operations manual. For better support on a specific Doosan machine that you are considering, look for the blue book with machine parameters inside the electrical cabinet. It should be attached to the back of the door, if not, ask the seller if they can provide it.

Over the years Doosan and Daewoo have had numerous iterations of controls. Most of the controls have been Fanuc, but there are a few Mitsubishi. Support is more widely available for the Fanuc controls. If you have a question about how the controls work with the machine, technical support from the Doosan hotline can help. For questions about the Fanuc logic or for yellow parts (Fanuc parts) contact Fanuc directly.

Doosan lathes are available in a number of configurations. Doosan offers horizontal compact, horizontal high-performance, multi-tasking, horizontal multi-axis, horizontal twin spindle, aluminum wheel turn, vertical turning centers, and vertical ram-type options. Since 2005 the PUMA line has been under the Doosan name, before that they were under Daewoo.