Pipe and tube bending machines are used to bend piping materials into different angles and curves. The bending machines must do this safely and without compromising the pipe's integrity. Pipe benders come in four primary categories based on how they are powered: manual, hydraulic, electrical and mechanical. Computerized controls are available for all pipe and tube bender types except manual. Our staff has decades of experience handling different manufacturing requirements and will be able to help you source the pipe bending machine that fits your needs and budget. Call us at (844) 262-6789 and let us help you find the perfect option.

In addition to the four primary categories, pipe and tube bending machines can be grouped by how they apply the bend. 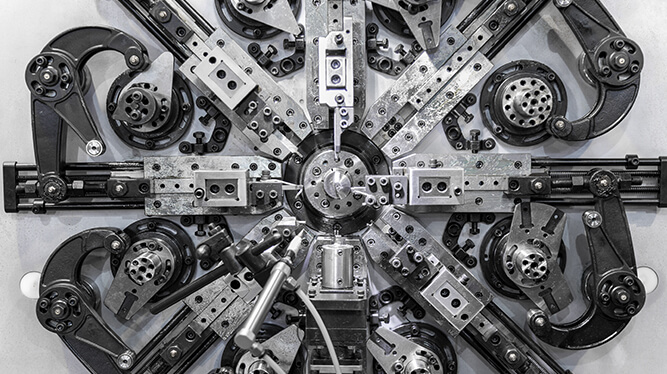 The rotary draw bending machine is the most common type of pipe and tube bending machine. It works by first securing one end of the tube with a clamp die, then turning the bend die around on its access. The size of the bend die determines the turn's inside radius. This method is very accurate and works well with programmable CNC controls.

Roll bending machines are also called 3-roll benders because of the three rollers used to apply the bend. The two lower rollers are fixed, while the upper roller can be adjusted to change the bend's radius. The pipe is run back and forth between the rollers until the desired bend angle is achieved.

A press bender, also called a ram bender, is the simplest type of bender available. It works by securing the pipe to two stationary dies. The distance between these dies can be changed to adjust the radius of the curve. Once secured, a powered ram pushes against the pipe until it bends to the target curve. This process deforms the pipe, so it's only used in applications where the deformation doesn't matter.

Orbital head bending machines use computer controls and automation to perform apply bends to small tubes with high accuracy and speed. The machine's heads and collets are able to maneouver around the entire tube, which allows it to apply a series of complex twists as the application requires.

Induction bending involves drawing a pipe through a die. There is an induction coil at the bending point, which heats up the metal and allows the pipe to be bent more easily. This is a highly accurate process that does not require mandrels and does not cause unnecessary damage to the material.