The VTL is CNC lathe where the headstock sits on a horizontal table or faceplate which rotates on a vertical axis. The lathe has a side head that can be fed either horizontally or vertically and on single-column lathes, a turret slide that is mounted on a cross rail for feeding nonrotating tools. Find the right vertical turret lathe today. 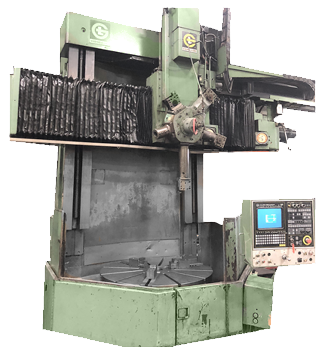 Vertical Turret Lathe are used for many kinds of machining on large parts including facing, boring, drilling and milling. Vertical turret lathes were designed to take advantage of the weight of heavy workpieces rather than work against the weight in the way that horizontal milling machines do. The first vertical lathe was developed in 1883 by E.P. Bullard and then carried on by his son E.P. Bullard Jr. Bullard VTLs were made all the way until 1989, and many are still in use today.

Vertical turret lathes were designed for handling larger workpieces that the previous engine lathes could handle. Some VTLs hold workpieces up to 22,000 pounds. These are great for making shafts and shanks in turbine engines, beginning with pre-machined forgings. Very large workpieces demand highly rigid rams. The ratio of ram deflection to its extension is a key indicator of the cutting ability of a VTL.

In operation, its a good practice to lower the cross rail so the ram is extended only as far as necessary to reach a workpiece. Some machines have a half-travel rail system. This concentrates the mass and allows the use of shorter ballscrews. Machines with a half-travel rail system require both left-and right-hand tooling. Certain machines are better designed for high-mix, medium volume production of high precision parts than others.

How Do Vertical Turret Lathes Work?

Vertical turret lathes capabilities vary in feed and speed ranges, angular turning limits and other special features. Earlier models of vertical turret lathes may have a coarser minimum feed. Models may have a minimum of .008 per revolution or go as low as 001 per revolution on very old models. There is also a lot of variation in the maximum feed rates. As compared to horizontal lathes, the speeds tend to be much slower. The evolution of lathes has been from handwheels to electric motors to CNC controlled motors to position the workpieces and tools. Electric drives may be controlled by levels.

Typically, when there is a feed control lever on a vertical turret lathe when you move it to the creep position, the turret head moves in the direction selected in increments as low as 0.0001 inches per minute. This creep feed is independent of the table revolution. Attachments are available on some machines to permit threading up to 32 threads per inch with a single-point tool.

Lathe manufacturers specify gears which are positioned in the attachment to provide a certain ration between the revolutions per minute of the table and the rate of advancement of the tool. This attachment also allows the operator to turn or per an angle up to 45 degrees in any quadrant by position gears in the gear train. When you engage the correct feed lever, it cuts the angle.