Since 1988 when Haas Automation introduced their Haas mill model VF-1, a machine designed by machinists for machinists, Haas has continued to provide CNC mills for numerous applications. Haas has both Haas CNC Mill (VMCs) and horizontal machining centers (HMCs) product lines. We have a large inventory of used Haas mill machines ready for inspection. If you can't find the right Haas machine, contact our CNC machinery experts at 844 262-6789. We can help you find the right Haas CNC machines for your business. . 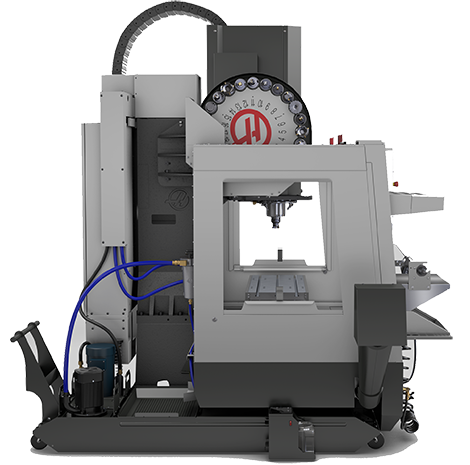 When selecting a used Haas mill, you'll want to take into consideration both your current and future needs for size, speed, versatility, and precision. Haas mill machines will vary by size taper, the number of axis (which determines part complexity), the RPM and tool capacity, among other things. You can speed up your selection process by learning more about the various series of milling machines that Haas offers.

What Are Haas Milling Machines?

Milling is a machining process of using rotary cutters to remove material from a workpiece to create a part. There are many different kinds of milling machines, however, they are often described as either vertical or horizontal. Because of the ever-increasing complexity and features being added to both kinds of machines, both kinds may be referred to as machining centers. Most CNC milling machines have the ability to move the spindle along the Z-axis which allows for freedom to engrave and make much more complex parts. When a fifth axis is added, making the machine a 5-Axis machine, the B axis controls the tilt of the tool to make extremely complicated geometries. Most selections for CNC milling machines begin with the size parts you plan to machine. Vertical machining centers and Haas mini mill make smaller parts and the super-size parts are usually made on a horizontal machining center.

Vertical mills are usually used to machine flat surfaces. They are called Vertical because the spindle is vertically oriented. This spindle holds the milling rotary cutters and feeds the spinning cutter along the workpiece in the direction dictated by the program. You will find the Haas vertical machining centers are sold as Haas VF Series, as universal machines (UMC), mini-mills (MINI MILL) and drill/tap/mill (DT & DM). There are also machine series designed for specific applications, like the mold machines (VM) and tool room mills (TM). For small parts in tight spots, the compact CNC vertical mill (CM) may fit the bill. For the largest applications, cutting plate and sheet Haas offers the Gantry series (GR).

The V in the VF series refers to vertical, and the F1 was unofficially called the Very First One. They caused quite a stir in the industry because no American manufacturer had ever offered machining centers for under $50,000 when it was introduced in 1988. In our used Haas machines listing you will find that the VF1 has evolved over the years. The earlier models had considerably lower horsepower, coming it as low as 7.5, as compared to the 2018 version which is 30 hp. The progressing speed has been amped up from only 20 blocks per second to 2000 bocks per second on newer models.

In 2002 the Super-Speed, called SS in the product line, was first introduced. If youre looking for speed, the super-speed VF-2SS is a CNC vertical mill that goes 12,000 rpm instead of 8,100 rpm like the standard series VF. In some demos performed by Haas, identical parts were made about 20% faster on the SS version as compared to the standard. These fast machines were the first in the VMC series, and are built for speed and precision.

Selecting a Model in the Haas VF Series

Though production for the VR Series ended in 2013, you can still find them used. The VR Series of machines for Haas is a five-axis contouring machining center designed for large 5-axis machining operations. Travels range from 64 x 40 x 30 for the VR-8 to 120 x 40 x 30 for the VR-11. These machines can make large complicated parts using a dual-axis spindle with a fully enclosed gimbal design to protect gears from chips and coolant. The VR series comes standard with a 32-pocket automatic tool changer that swings out for unobstructed machining and a 30 hp, high-torque spindle. Some options to look for including the rpm of the spindle which may be 15,000 rpm or 10,000 rpm, the connectivity options and various through-spindle coolant systems. Unlike the VF Series, you cannot replace shims, and the spindle sweep procedure is different.

The UMC Haas machining centers all come to the same size, 30 x 20 x 20 but with various features. The UMC-750 is a great 40 taper, 5 axis, 40+1 tool machine with 8,100 rpm. Add the SS and the spindle speed is increased for faster cycle times. The UMC-750P is a 5-axis profiling CNC vertical mill for extra versatility.